A simulation of a dead author struggles to keep creative control.

A cabal of gutter gods uses a child-priest to win power.

Academics and explorers go slowly mad and strange as they hunt the city of Imlutha.

Transmission Burst collects the first year of microgames from the UFO Press Patreon. In this book you'll find diceless, dice-based and card-based games; GM-less and GM-full games; games for a pair of players, for a group of players, for a single player. Grab the book, gets some friends together and visit new worlds!

In order to download this game anthology you must purchase it at or above the minimum price of $10 USD. You will get access to the following files:

Transmission Burst #1 is a collection of twelve short games, and the average game in the collection is pulpy, quick-to-pick-up, and fun.

It's 24 pages, with solid layout that changes to match the themes of each game.

The first game, Parasite Vector, is a cool action-movie style assault on a base. It has a lot of neat biopunk notes, and runs off of a simple but crunchy engine, but it implies a handful of mechanics it doesn't fully explain so you may need to houserule key elements on the fly.

The second game, The Holy Mountain, is an intensely atmospheric diceless roleplaying game where you play as pilgrims climbing a mountain path to atone. At the start of the game, the mechanics restrict you from speaking or showing almost anything about your character, but as you play those restrictions fall away, making this a really cool slow burn game.

The third game, Ghost Writer, is more of a paired writing exercise, where you're generating summaries of chapters written by a defective AI scan of a dead writer. I think it has a lot of potential as a party game or performance game if you pick an author everyone's familiar with, rather than making up an author, but the game doesn't specifically instruct you to do this.

The fourth game, Ill-Gotten Gains, is a Locke Llamora style grift-em-up. It's got most of a Blades In The Dark style engine packed into a single page, and I kind of wish it had more room to breathe. Like Parasite Vector, it feels a little squeezed by its space limitations, and I couldn't quite tell when cons are supposed to end (after every player has had a turn?) or if progression does anything more than smooth out the dice math. As far as I can tell, if cons are supposed to require every player taking a turn, and if everyone has high dice pools, groups of 7+ people cannot succeed.

The fifth game, Escape, is a clever two-player competitive narrative card game. It's got a vaguely slasher movie vibe, but the narrative is pretty much all emergent, and it feels solidly balanced and fun.

The sixth game, Stardust Contenders, is a semi-open-ended space olympics story. It feels like it would run comfortably over the course of several sessions, and it uses a simple but engaging dice mechanic that's very easy to teach. However, if you have more than four players, you'll need to homebrew some activities to add to a list.

The seventh game, Edge Of The Galaxy, is a somewhat cozy Star Trek Voyager game about exploring outwards until you hit the perimeter of currently explorable space. The mechanics aren't built around success or failure, just how much you change along the way, and that makes this potentially a really good choice as an introductory rpg for people who might like to try collaborative storytelling.

The eighth game, Whispers Of The Green, is very nearly the same thing, but with a lovecraftian gallivanting tone.

The ninth game, Advent, is is a christmas game about being besieged by christmas. It plays kind of like a christmas movie, and you're free to swap out christmas for a calendar-devouring major holiday of your own making instead, if you wish.

The tenth game, Bag Of Bones, has everyone playing as one limb of a giant robot. Except the robot is a giant skeleton abomination. And you have to decide whether to follow your creator's orders. This knocks it out of the park on concept alone, but the mechanics are fun too.

The eleventh game, Vermin Gods, is a clever rules inversion where the GM is the player and the players are GMs. You play as a street kid channeling neglected gods, and although the game doesn't put a lot of limits on where you go from there, it feels like it's almost always going to end on a satisfying or poignant beat.

The twelfth and final game, Conclave, is a 3--5 player diplomacy sim. I don't have a good sense of how it plays, but it's got varied win conditions, the possibility for multiple winners, and in general a lot of fun complexity of interactions for a single page game.

Overall, this is a heck of a collection. Everything in here is solid, polished, and even the stuff that feels experimental is still very grounded and playable. If you're looking for some short trpgs to run with your group, this feels like an extremely safe pick, and I would strongly encourage grabbing it.

-Page 19, 4 paragraphs up from the bottom of the page, "mustpull" must pull

Reply
Speak the Sky2 years ago(+1)

Here's a twitter play-through of Edge of the Galaxy from this anthology (played solo), featuring an impossible black hole supercomputer oracle, an eco-brutalist ringworld, and trashy sci-fi romance novels! 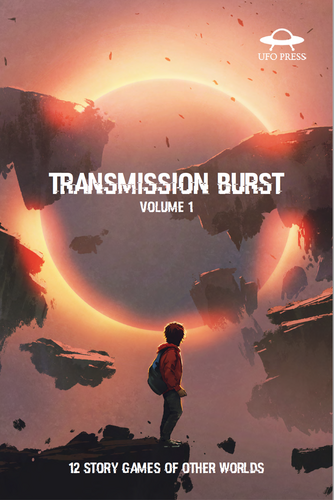 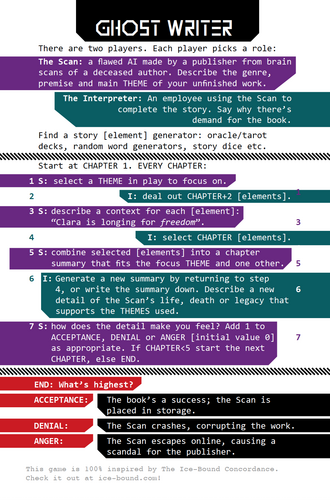 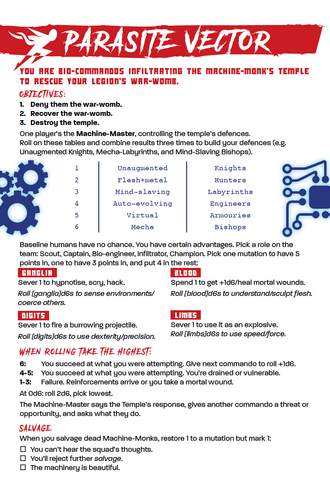 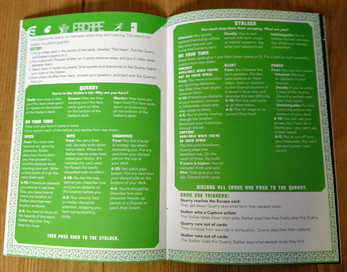