Criminals twist the timeline to evade their targets.

Academics fight for their lives against plague.

Transmission Burst volume 2 collects my second year of microgames. In this book you'll find diceless, dice-based and card-based games; GM'd, GM-less and GM-full games; games for a pair of players, a group of players, even a single player.

Grab the book, pick a game, and visit new worlds!

In order to download this game you must purchase it at or above the minimum price of $9.99 USD. You will get access to the following files:

The PDF for Burst 2 is 36 pages with a solid, distinctive layout for each game. There are no major illustrations, but there are a lot of cool little graphics and details, and everything is readable.

Like with the first collection, I'll list the individual games and a quick overview for each. Everything is fairly short here, but that doesn't mean it's not meaty, and there's a strong variety of games here. The overall tone is a bit darker and more existential, though, so if that's what you're looking for, start with this one first.

In Publish Or Perish, you're at a conference on infectious diseases and an infectious disease is spreading. You can try to cure it, or you can present findings about it for an academic reputation boost. The person with the most prestige at the end wins. While super nihilistic, there's a really solid card game foundation, and it plays sort of like a boiled down competitive Pandemic.

In Larvae, you play a metamorphic alien who has been left on earth to adapt and fend for itself. It's a single-player, single-GM game, but it could just as easily work for a group, and the dice are simple and teachable and balanced towards character improvement. Your GM will have to come up with their own plot, as the game isn't too specific in that area, but this allows for a wide range of stories to be told.

In Mimic Escape!, you play as a person, several props, and a mimic in a dark room. It's a competitive LARP, ala Among Us, and everyone has a goal and failure condition in the game's five minute scenario. However, in a sense it's a game of lots of micro GMs, because most of the gameplay is the person talking to the props, asking questions about what parts of the prop they can perceive, and then deciding how to open or smash the prop. The only real clue the person has as to which prop is dangerous is that the mimic can optionally choose to change its form (but it's never required to,) so my recommendation is to lean into this "multiple GM spirit" rather than playing oppositionally, and I think it will be a lot of fun.

In Liturgy Of The Dragon, you play as kobolds in a world where the dragons have all left. Salvation is not coming, but you talk to one another about your daily lives and you try not to confront that fact. The gameplay here is casual and melancholic, and you play as long as you want.

In Interment, you play as mourners deciding what to do with their sacred dead. The dead can be pressed into service, or sent on, and you determine this by commemorating them and then choosing. The tone is somber, but not tragic, and I think this makes an excellent pick if you like games that are intense but not painful.

In Here, At The End, you play as cultists in a retirement home, sharing old stories and waiting for the world to end with them. Like Liturgy and Internment, the gameplay here is storytelling. You're not trying to win. You're choosing what you're willing to share, until it eventually ends the world.

In Reflections, you play a detective at multiple stages of their life, picking over the same case. You use a deck of cards to generate random prompts, so the success of the detective is somewhat up to the RNG, and you're not required to solve the case by the end, just to get a sense of the character.

In True Lives Of The Cosmic Champions, you play as immortal galactic warriors that are sort of like endgame PCs in a big MMO. The real in-setting challenge isn't enemies, it's staying engaged, and your ability to keep playing is tethered to your fond memories connected to your heroism.

In Ghost Squadron, you play as the digital upload of a dead human, slowly forgetting your old memories and maybe creating new ones and you fight for a largely uncaring government. This is definitely the crunchiest, pulpiest game in the collection so far, and has the potential for a more optimistic ending ala a MurderBot novel.

In The Lodger, you play as a group of broke housemates who've had something supernatural and dangerous move in. It plays sort of like a raising sim or a worker placement boardgame, and you're investing ticks on the clock into activities to stay financially afloat and not freaked out---but also eventually you have to confront The Lodger or it will destroy you. There's a great sense of atmosphere here, and plenty of room to spin individual stories with a few or a lot of friends. It's definitely my favorite game in the collection.

In Gotta Get Out, you play as people attending a party in a dangerous timeloop. There's a sort of Happy Death Day vibe to it, where things can get sinister but the tone is pretty high energy. Depending on how you do (which is fairly luck-based,) PCs can have genuinely happy, upbeat endings or crushingly cruel ones, but there's plenty of time to loop before you decide you feel safe enough to push for the endgame.

In Be My Body Guard, you play as the bodyguard and VIP from The Bodyguard. You also play as their subconsciouses. You roughly follow a plot arc for a similar movie, but every time you encounter a check you resolve it by both playing a face down card. If the cards' colors match, you succeed. If not, you fail. Play therefore ends up being about how well you can coordinate with other players without communicating, which is neat and thematic.

In A Stitch In Time, you play as a group of time criminals attempting to pull off a heist by creating and splicing a perfect alternate timeline. It's fun and pulpy and works as a simple one-shot, but on top of that the physical mechanics are creative as heck. Every time you affect the timestream, you physically change a piece of string at your table. Events in the timestream are mapped to places on the string, so as the string becomes damaged, times you can change become locked off.  Ultimately, this is probably my other vote for my favorite game in the collection. It's approachable and fun, but it's also like nothing I've seen before. I strongly recommend it.

Overall, if you want a *lot* of indie games, all polished and playable, this is that. It doesn't lean as hard towards pulp the way the first anthology did, but  if anything you read here sounded interesting, I'd definitely recommend picking it up.

-Publish Or Perish, how long does the conference last? It's implied that everyone gets seven turns, since it does reference a week's end, but nothing ever establishes this for certain.

-Gotta Get Out, last para, "at the start of a loop" should this be 'at the end'? I'm not sure it's possible to have cards in front of you otherwise.

Awesome! Thank you for collecting these into one book, Jay. Transmission Burst 1 is still one of my go-to game collections since I got it in 2018!

Thanks! That's really lovely to hear - and I'm glad there's utility in putting them all together in one place. 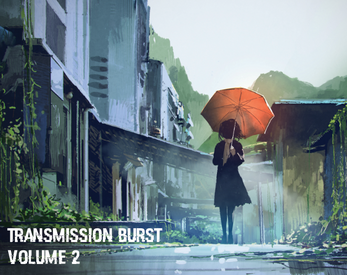