The world of man is dead.

The shining cities and glittering skies have been sundered by the Fall. Now their corpses lie in pools of pollution and the twisted creations of arcane artifice haunt their halls.

The world of man is born again.

Refined by apocalyptic fires, the survivors have emerged into the light. With remembered lore, keen blades and fierce loyalty you will retake the world.

Legacy is a game of survival and rebuilding in a world ravaged and altered by incomprehensible calamity. Craft characters and families, head out into the wasteland and create true, lasting changes in the world. With cutting edge rules, a highly flexible multi­-generational system, and more than a dozen character playbooks to choose from, Legacy has everything you need to start playing.

The Cultivators of the New Flesh

Each player controls a family – a group of survivors brought together by blood, hardship or a shared philosophy. These playbooks let you customise everything about your Family, from their lifestyle (Nomadic, Dispersed or Settled) to their guiding philosophies, traditions and special Moves. You will also start with a number of Surpluses such as weaponry or land that show their particular strengths, and Needs such as medicine or leadership that define the things they’re lacking. These Surpluses and Needs tell you what state your Family is in at the start of the game, and give you clear goals to start the ball rolling.

Once you have a world, a family, and a particular issue your Family is facing, you then make a Character. Your Character might be the leader of your Family, an up-and-comer without a reputation, or an outcast, but no matter which the fate of the Family is in their hands. Legacy comes with eight different Character playbooks:

Each character can be personalised with your choice of looks, gear, stats and moves.

Legacy has built-in support for multi-generation play. Once your group has dealt with the issues of the age they can choose to move a generation or more into the future, and rules kick in to establish how each Family changes as the ages turn. This is also an opportunity to shake up the political, cultural and geographical landscape of the Wasteland, adding in new threats, factions and opportunities.

In order to download this tabletop RPG you must purchase it at or above the minimum price of $19.99 USD. You will get access to the following files:

Loving the game! I'd really like to get a physical copy, but your website tells EU customers to buy elsewhere. I've not been able to find it anywhere else, any advice?

As a new user who bought this in a bundle, it was not immediately obvious to me how many players this game was for. It might save someone an extra few seconds if you add that it’s 3-6 players on this page.

Print copies are out of stock in most UK shops, so I was excited to see the Black Friday sale offer included the print copy!

Looking forward to getting the book :)

Will you be able to advise when it has shipped?

Will do! Though this book (and many others) have been in stock for a long time over at ufopress.co.uk 😄 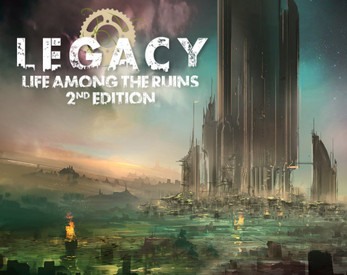